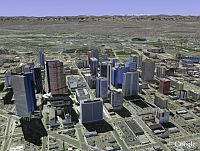 Last week Nathan Weinberg wrote at his InsideGoogle blog comparing Google Earth’s 3D model of the Miami SuperBowl Stadium verses the one in Microsoft’s Virtual Earth 3D (VE3D). He made some pretty negative comments about Google Earth’s 3D models. So, I posted a comment that he should look at the 3D buildings in Denver for Google Earth to make a fair comparison of the capabilities. Nathan has now posted his new review of Denver in 3D in both GE and VE3D and he gives it a pretty fair comparison. He says Google Earth’s 3D buildings do look really nice in Denver. He subjectively concludes VE3D and GE are a tie when it comes to Denver. There are a couple of technical details which I believe make Google Earth’s buildings look better, but in the final analysis I agree with Nathan on a key point: Google did indeed use some of its own people to create the Denver building collection. This hand-made approach does not scale well if you want every city in the world to have 3D buildings. Google has been providing the free Google SketchUp 3D modeling tool and allowing people to upload the models to their 3DWarehouse. This is working well for the larger and more interesting buildings around the world, but won’t work for all the rest of the buildings in the cities. I’m sure Google is well aware of this reality.
I understand from Microsoft that some of their buildings are hand made as well. But, the bulk are not. Microsoft’s approach is to take multiple aerial photos and using photogrammetry to calculate the size and shape of buildings and extract 3D building models and then use the photos to texture them. Microsoft’s huge investment to acquire and develop the technology, buy the camera assets, hire teams of aerial photographers to collect the data, and the storage and processing costs will ultimately enable them to create building models for nearly complete cities around the world in a scaleable fashion.
The jury is still out whether an approach Google may take in the future could not be done more cost effectively with the same or better results. Google has a growing list of cities with 3D buildings. But, right now Microsoft seems to be on the faster track to add detailed photo-textured 3D buildings. Google has similar financial resources and a lot of brain power, so there’s no reason to believe Google has to fall behind in this one area – 3D Buildings. In the meantime, Google Earth enjoys a very healthy lead with regards to imagery, user-base, a mature delivered series of products, millions of user contributed data files, and the huge repository of data sitting in the layers of Google Earth which many people have yet to explore.