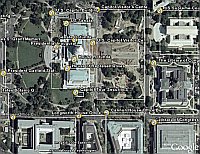 Exciting news! A few months ago one of the most talked about (and most used) Google mapping applications was released under the name Wikimapia. Wikimapia is a tool which lets anyone mark something in the Google Maps satellite/aerial photos with a rectangle and then write about it and/or provide links to Wikipedia. Just like Wikipedia, it lets anyone edit the commentaries / descriptions. The interface is intuitive and clean. As soon as I first saw it, I sent an E-mail suggesting they create a Google Earth network link to show the same information. Well, Matt Jones just wrote to tell me they now have Wikimapia for Google Earth (see his blog entry). Try out the Wikimapia KML network link

and you will be able to zoom in and see Wikimapia areas in Google Earth for your current view. The more you zoom in, the more you see. You can click on the placemarks to get a link to the Wikimapia descriptions. I’m so glad they finally decided to support GE as well!
This is just the beginning of the possibilities. I’ve been thinking about new ways Wikimapia could be extended with Google Earth. For example, creating polygons with the rectangles and filling it with varying colors at a low transparency would make it look even better. There’s also some possibilities created with the new GE API (just announced recently by Google) which would allow more interesting integration between Wikimapia and GE. Thanks to Matt for letting me know about it, and the Wikimapia people for implementing GE support!
[UPDATE 10/3: Here is an example

I did a while back while thinking of ideas for Wikimapia in Google Earth. I’ve used colored transparent polygons instead of outlines, and included pictures in the descriptions.]