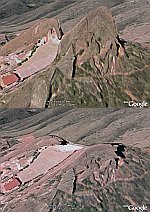 One of the most exciting features of Google Earth 4 Beta is that it allows you to have 3D textured models. I have written about many such 3D models over the last few months since GE 4 beta started in June. Last night Stefan Geens at Ogle Earth wrote about someone supporting the ability to publish 3D terrain from LIDAR and drape the terrain with Google’s underlying satellite data to get better 3D terrain (see the example

– GE 4 required – from 3DNature). Being a bit of a flight simulator fan, it suddenly occurred to me: It should be possible to take the many examples of higher resolution terrain data available for both free and as commercial scenery upgrades for Microsoft Flight Simulator and port the terrain data to Google Earth. Then you could use Google’s pictures (or the pictures contained in the MSFS scenery files) to show them in Google Earth! (Here’s a review of just one example of improved terrain for MSFS which has 38-meter and 78-meter resolution 3D terrain for the US).
Some of the terrain datasets used by flight simulator users are actually publicly available sources which are better than the default space shuttle terrain data used by Google Earth. So, it might actually be relatively easy for Stefan to get the Matterhorn. However, I don’t think Google Earth’s memory architecture would allow you to load large areas of terrain as a 3D model into Google Earth. You might have to selectively convert special areas (like Stefan’s Matterhorn) into GE 4 3D models with the textures. However, there are some features in the new KML 2.1 spec to allow region-based viewing which might make it possible to do larger terrain areas. Any flight sim terrain mesh hackers out there want to give this a try? Is this posssible Google? Maybe someone will start selling scenery upgrades for Google Earth…