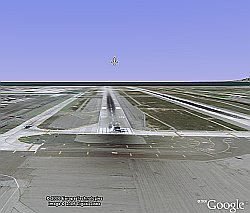 The new version of Google Earth 4 Beta now supports controllers. If you already downloaded the new beta a day or two ago (version 4.0.2080 for windows), be aware a new release was made this morning which has a new control feature in the options for controllers. By controllers we’re talking things like Joysticks, Flight Yoke/Rudder controls for flight simulators, even racing wheels. I’m not sure if controllers are supported on the Mac as well.
If you have the latest version (Windows 4.0.2091) you can enable the controller in the “Options->Navigation” panel. If you have 4.0.2080, I recommend you go ahead and re-download to get the new version. You also should calibrate your controller using the Windows Control Panel.
In Google Earth, you can turn on the G-Force mode by hitting CTRL-G (note: use CTRL-T to return to normal mouse interaction). You will know if you are in G-Force mode if you have an airplane icon for the mouse pointer. Once you’re in G-Force mode, you can use your controller device to fly in Google Earth. With a flight stick controller you can use your yoke to fly like a plane. Unfortunately, with my controller (a Virtual Pilot Pro) the throttle control doesn’t control speed. I found some of the buttons on the controller would control speed though. (You can also right click your mouse and move forward and backwards to control speed). But, the pitch and roll works as expected with the yoke. It’s a very fun way to fly around in Google Earth. Check it out if you have a controller!

NOTE: If when you first load up the new GE 4 Beta in Google Earth your globe is turning, try calibrating your device or adjusting the trim tabs on your controller to stop the spinning. Then follow the instructions above to test things out.