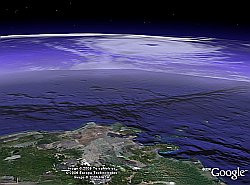 Since the new GE 4 Beta supports photo textures, it is now possible to do a new kind of globe-wide image overlay. A ‘barnabu’ has posted a new version of the Global Cloud layer

which can place the current clouds (from satellite photos) at different altitudes. This is done by making a large spherical 3D model with the global cloud image as a texture. In this case, barnabu has created globes which are successively larger so the clouds can be at higher altitudes. He uses the new radio-button feature from KML 2.1 for choosing the models at the different altitudes. The highest one I think he did for fun because it results in a really weird picture.
One advantage to this approach is that when you zoom in below the clouds you can see the ground unobstructed. It is possible to write a program to make the normal global clouds go away at lower altitudes (and that works for GE 3 as well), but this way is more realistic and faster. The screenshot gives you an idea of how it is done (that is Typhoon Ioke still 1500 km from Japan, the clouds are artificially at 200km in height). But, you still can’t really see the clouds from below like you would in real life. The resolution of the clouds is too low because it has to cover the entire globe. If barnabu makes this 3D model into a network link, this would be a suitable enhancement for the “official” global cloud layer. By the way, I recommend upgrading to GE 4 if you haven’t already. Download it here (choose Version 4 on the right).