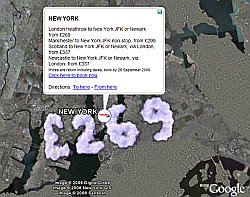 . At the moment, this is bit of a marketing exaggeration – what you get is a collection of placemarks (not a layer or even a network link). So, the file will appear in your Places pane. However, the file (a little large at 390K) does contain a large number of placemarks with useful destination information and pricing. It includes both airfares and hotel information and pricing, and links are provided to make actual reservations and purchases.
Interestingly, if you use GE 4 Beta you will get a set of 3D models which show the price for airline tickets to each major city. The font for the price is in “clouds” style. In the screenshot here you see the price as £269 to New York from London Heathrow. Clicking on the icon gives prices from other UK airports.

They should definitely make the file a network link. Otherwise folks will have to go to the web site every time they want to check for current pricing. A network link would enable people to save the British Airways “Layer” and have it automatically update with current data. Also, I think the 3D price “clouds” are the reason the file is so large. If they put the prices as a network link they can be loaded based on when the cities are viewed making the file much smaller (especially important since GE 3 users can’t even see these models).
According to Forbes, British Airways wants to increase online sales to 50% of their business. Using Google Earth is certainly an interesting move – it will take some more work to make this a more robust GE online reservation system. It is rather forward looking of British Airways to make such a move.