Last week Microsoft released a video showing new photo georeferrencing technology being developed as part of Microsoft Live Labs and done in collaboration with the University of Washington. The technology called Photosynth is truly breathtaking. The concept is to create a 3D experience out of photographs and the scene detail increases as you add more photos. It’s best described by either watching a video, or actually trying out a live Java demo of the application. Here’s the video:


So, what does this have to do with Google Earth?

Right now, Google Earth has some limited built-in 3D buildings (38 US cities have some simple grey-colored 3D models of buildings). Thanks to the freely available Google Sketchup, and the open KML file format, several other cities are getting 3D buildings from user contributions (see Vancouver, Buenos Aires, Cape Town. 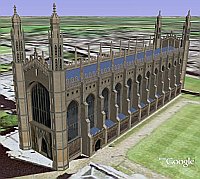 If you were to integrate Google Earth with some of the features of Google Picasa and Google SketchUp, you wouldn’t be far from having the capability of Photosynth. Picasa is already being integrated with GE for geotagging. And SketchUp has also already had some integration with GE. Google Earth 4 Beta now allows you to show photo textures over 3D models. I recommend watching this tutorial for Google SketchUp where you can see how easy it is to add phototextures to 3D models: making a birdhouse with photos. It should seem very familiar after viewing the Microsoft Photosynth video or demo.
Showing the power of integrating photos with 3D models is something Google Earth has been doing since day one. Google SketchUp has enabled anyone to add their own photos to the 3D world of GE. Photosynth is an excellent R&D demonstration of taking that to the next step. Google also has technologies capable of providing some of these capabilities. I’m sure Microsoft’s Photosynth can only help inspire Google and other companies to advance their capabilities. There is no doubt Microsoft will consider using technologies from the Photosynth project in their own 3D globe when they release their challenge to Google Earth. Microsoft has also acquired some other technologies which might enable them to autogenerate 3D models of buildings with phototextures. I’m sure Google will also continue to advance their abilities to integrate photos in 3D space. It’s great to have the big guys competing in these areas. The by-products are technologies like Google Earth and Photosynth and what we get to play with, as users of these free applications, is simply…amazing!
See Dr. Hudson-Smith’s views on PhotoSynth at DigitalUrban.