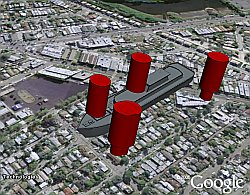 This is a really interesting application / concept being developed by Julian Bleecker at USC. He decided to perform a lab experiment blending real life, GPS, mobile applications, and Google Earth. The concept is based on the Milton Bradley Battleship Game except in this game you take your GPS-enabled mobile phone and go walking around town to search for a virtual battleship. Here is Julian’s description:

One person places their ships using Google Earth and the other person goes out in the normal world with a mobile phone, a GPS connected to the mobile phone. The phone has a small Python script on it that reads the GPS and sends the data to the game engine, which then updates the Google Earth KML model showing the current state of the game grid. When the player who’s trying to sink the ships wants to try for a hit, they call into the game engine and say “drop”. The game reads back the coordinates at which the “peg” was dropped and shortly thereafter, the other player will see the peg appear at the coordinate it was dropped. If the peg hits one of the ships, it’s a Hit, otherwise it’s a miss.

You can check out a sample GE Battleship network link

(NOTE: Works only with GE 4 Beta) which lets you see a battleship overlayed over the aerial photos in GE and watch the pegs being placed (assuming someone is testing the experiment). I think this is a great concept, and I can think of many other possible games using mobile applications and Google Earth. For example, how about virtual scavenger hunts? Or, virtual GeoCaches? Amazing!