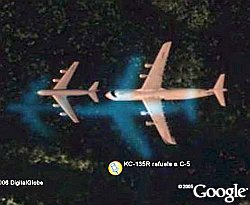 Yesterday, someone was looking around at Lava Fields in northern California, and came up with his first discovery of a plane in flight. Only, this one was a really BIG find: a KC-135 refueling a C-5 Galaxy in mid-air!

It was posted by someone called “Helomech” at the Google Earth Community (GEC). This is a fantastic find and is on a par with the Lancaster bomber found flying in the UK. The refueling shot is a satellite photo. The “blue ghost” double image is actually an artifact of the satellite photo and is due to the motion of the two planes. In fact, if you look closely at cars on highways in satellite photos, you will sometimes see these ghost images for those moving objects as well. The distance of the ghosts from the actual objects is an indicator of speed.
Those of you who…

Those of you who are regular readers know one of my Google Earth hobbies is to look for aerial or satellite photos which have captured planes in flight. There are actually a number of people at the Google Earth Community who share this hobby, and there is a “database” of placemarks which show all of the planes in flight found to date. The placemark collection is constantly changing because Google updates the imagery database on a regular basis. If you find a plane in flight (or planes), you should check first to see if its already in the database. Here is a network link for the database of all the known planes in flight

around the world.
[NOTE: someone just pointed out to me a farmer has cut out “USA BUSH” in giant letters in a corn field just to the northwest of these two planes. See it here.

You’ll need to have “historical imagery” turned on to see the letters]
Related: