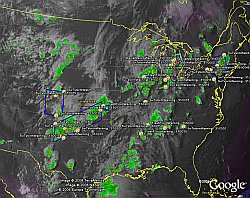 The National Severe Storms Laboratory (NSSL) at the National Oceanic & Atmospheric Administration (NOAA) has been experimenting with Google Earth as a visualization platform. Last year I had put an earlier version of their radar reflectivity composites in a storm tracking tools collection. The nice feature being that the radar data had transparent areas where there were no storms, so you could still see the satellite photos for unaffected areas. I am in the process of collecting new storm tracking tools for this year’s storm season. The NSSL has been improving their excellent collection of network links for tracking thunder storms (read some papers they have publised on using GE for weather).
The most useful network link at the NSSL web site is the CONUS radar reflectivity map

with severe warning polygons (the areas where severe warnings are in effect). Note: the data is updated every 1 to 2 minutes. You can turn on and off a “Contrast Adjustment” (black or white) which helps highlight the data. You might also want the satellite maps

to compare IR, visible, and water vapor satellite photos (which update every 10 minutes) to the radar data . The visible satellite file is missing when it is not daylight hours in the US. The storms yesterday afternoon were pretty interesting.
There are many other useful Google Earth files and weather data on the NSSL web site. If you are really into weather, I encourage you to look. Very soon I will be publishing a new collection of storm tracking tools for Google Earth to help track tropical storms and hurricanes. Leave me a comment here if you know of any particularly good new ones.