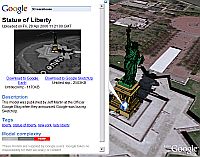 . The network link lets you find the models which have been placed onto Google Earth, the placemark descriptions give you a screenshot and details about the model, and give you the choice to download and look at it in Google Earth. You have to pause a couple of seconds for the network link to search and find out if there are models in your current view.
Let’s see what it takes…

Let’s see what it takes to place a SketchUp model into the 3D Warehouse. Right now the 3D Warehouse has only a few 3D models placed in Google Earth (maybe 100 or so). I noticed the Statue of Liberty created by SketchUp was not placed yet. So, I placed it myself as a test. To place a model you need to have Google SketchUp installed on your machine (Windows only at the moment) – download SketchUp here. You also need to have a Google GMail Account to be able to log into upload to the 3D Warehouse. Here are the steps I took to put it into 3D Warehouse.

If you load the 3D Warehouse Network Link

, and type “Statue of Liberty” in the “Fly To” search field, you will now see the placemark for the Statue of Liberty model I uploaded. Click on the placemark and choose “Download to Google Earth” to see it yourself. This only took about 10 minutes to accomplish (most of that time was spent downloading, importing, and re-uploading). This process is actually amazingly easy for uploading models in my opinion. Nice work Google!