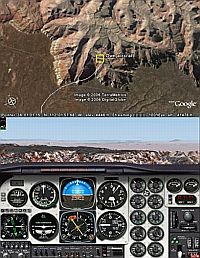 Last week someone wrote me about their release of FSEarth – an add-on for Microsoft Flight Simulator 2004 (MSFS) and Google Earth (GE). This US$9.95 program allows you to interactively watch your aircraft in MSFS simultaneously in GE. There is a trial-ware free version which lets you fly in a limited area of Alaska, but the author was kind enough to let me try a full version.
The install process is fairly simple. You download a file, run a setup program which installs the files in your MSFS folder, start up MSFS and start FSEarth from the Modules menu, and use the FSEarth menu to start up Google Earth. FSEarth uses a network link in Google Earth to communicate with MSFS. Once you have things started and your plane moving in MSFS the plane position is shown and a GPS-like track is shown in GE. There is an interface for controlling the appearance of the camera in GE, and you can control how often the updates occur in GE. Performance in MSFS suffers if you update GE once a second. However, updates every 4 seconds or so seemed much more fluid. FSEarth also lets you run the GE part on another coputer on your network, which greatly improves performance. While you’re flying, you can turn on layers in GE to see interesting information not available in MSFS. The author notes that scenery designers can compare notes with the real world with this tool.
In late February, I wrote about FSPilot V1.4. And, the first MS Flight Sim interface for GE was released last summer, which also let you see other (auto-generated) airplanes in MSFS. But, as I predicted back then, we continue to see more applications allowing interaction between MSFS and GE.