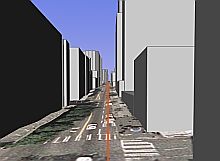 There has been a lot of talk about the new technology preview from Microsoft for Windows Live Local. The preview shows street-level views and allows you to drive a virtual car through the streets of Seattle and see front and side views which are still frames from a camera. And, it all works through a browser. While this is a Very Cool preview, it is pretty limited (currently only a section of Seattle works) and it’s really slow and awkward to use. I was thinking about the similar capability already built into Google Earth. Yes, Google Earth can let you drive through a city and get a feel for the surroundings complete with virtual buildings and satellite or aerial photos. And it already works in most major US cities. No, it’s not as cool as the new Microsoft thing, but Google Earth is actually much more practical and it works smoothly.
First, if you’ve never used GE “Play Tour” mode, read this. Then come back here.
Now we’re going to…

Now we’re going to simulate a street-level Seattle drive in Google Earth. To make this more realistic, you need to modify a couple of simple settings in Google Earth. First, turn on the “Buildings” Layer. Next go to the menu choice “Tools->Options” (NOTE: “Google Earth -> Preferences” on the Mac OSX version). In the Options window select the “Control” pane, then select “Advanced” at the bottom. In the “Driving Directions Tour Options” first take note of the current settings, then move the “Camera Tilt” all the way to the right (80 degrees), and the “Camera Range” to the left (150 meters). Ok, all done, now select “Apply Settings“.
Now download this simple driving path

for Google Earth. Select the “Seattle Drive” Placemark you just downloaded (make sure you have the “Buildings” layers turned on) . You might want to double-click it and let GE download the buildings for Seattle first. Then hit the F10 key (or “View->Play Tour“). GE will now take you down a main street of downtown Seattle. I’ve only placed a single straight-line path, because GE tries to swerve around when you go around corners with the Play Tour option. This looks cool at the normal higher camera views, but at street level it swerves you through the buildings.
When you are done, don’t forget to set your “Driving Directions Tour Options” back to their previous settings (mine were at 65 degrees and 1500 meters).