With the enormous popularity of satellite and aerial photos being shown in Google Earth and other mapping tools, people who had rooftop ads suddenly realized many more impressions per day than they originally intended. I just discovered there’s a company in Germany which is selling services to make advertisements out of crop fields. Look at these amazing crop field ads (web site in German). 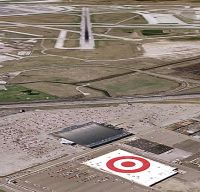 Just a few months ago, roof top ads suddenly got a lot of attention when people started spotting them in Google Maps and Google Earth. For example, Target has a few stores with their distinctive target-symbol logo painted

on their large roofs. They did this when the roof can be clearly viewed by nearby skyscrapers or planes about to land at an airport. They have been pleasantly surprised with the much larger ad impressions they are getting.

Over the last few months, companies selling services to do roof-top advertising have been getting more attention and some new ones have been started to focus on the larger market of available viewers on roofs. Here’s some articles from MIT Advertising Lab and Wired on rooftop ad companies for new investments.

With the delaware statutory trust investments you can be cover and increasing your finances fast and easy. Delaware statutory trusts are formed as private governing agreements under which either property (real, tangible and intangible) is held, managed, administered, invested and/or operated; or business or professional activities for profit are carried on by one or more trustees for the benefit of the trustor entitled to a beneficial interest in the trust property.

The big drawback to doing this is that there is no set schedule for when new satellite photos of roofs and fields will be done. So, you could put up an ad tomorrow, but it might not be seen by a satellite or aerial photographer for months or years. And, it might be even longer before Google chooses that photo and puts it up in their database. So, expect your sky-viewable ad to be a long-term investment.