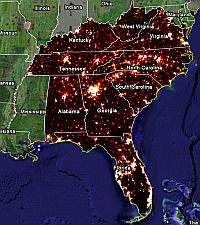 An excellent case of visualizing data sets is this collection taken from US Census data showing population densities, median ages, and male/female ratios. There are two levels of data, one at the county level, and a higher resolution level at the census block level with a file for each of the 50 states. The results are polygon maps overlayed over the satellite photos in GE. These awesome visualizations were produced by Juice Analytics which provides data analysis and visualization services. For example, look at the state of Florida population density

This geospatial data shows both the shape of the census units or counties as polygons, and the color represents the number associated. In aggregate you can quickly get a picture of meaningful information. When you turn on other layers in Google Earth the data can be better understood. For example, my daughter was asking why the population density was so low (black) in the western part of North Carolina. I turned on the Parks and Recreation layer and you could immediately see why no one was living in that area. In fact, you could see other areas around the state which were parks and therefore had low or zero population density. You can turn on the Roads layer, and the Populated Places layer to understand the geographic references to the data better. There are many other layers to explore in relation as well. This is great stuff!
Check out Juice Analytics’ Absolutely Google Earth which is a collection of useful links for serious Google Earth users. You can find some of these links in Google Earth Blog’s Reference Links Page. Saw this first via OgleEarth. Digg it!