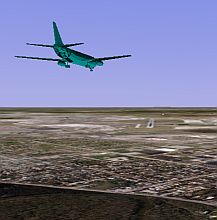 For a couple of weeks a guy called Sven from the Netherlands has posted his attempts to add 3D planes to the FBOweb real-time flight tracking application written about here before. Well, Sven has succeeded in creating a new version of a network link which places 3D airliner models in the correct 3D position from the fboweb application. NOTE: when you download the 3D plane flight tracker

, make sure you turn on only one airport in the Places folder (ORD, LAX, BOS, or ATL) at a time as these network links use a lot of bandwidth. Also, you can double click on a flight folder to position yourself over a plane, then open that folder to find “Points of View” which allow you to select other views including different angles from the pilot perspective, directly above, or directly toward the plane. The network link updates every few seconds, so you may have to change your views often.
The application doesn’t actually know the orientation of the plane in flight, but I believe he takes the short track from the previous position report and computes an angle of orientation accordingly. The orientation does look correct most of the time, or just off by a few degrees. Sometimes the flighttracker position data looks messed up, I saw one position report with planes on obvious collision courses. So, please don’t expect the position reports to represent actual real-life situations. Despite the anomalies, this is a really cool addition to the flight tracker. This is great work Sven! Thanks for telling me about it.