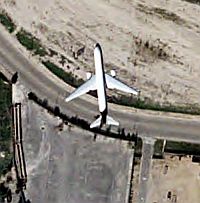 It is becoming something of a passion for some, looking at the high resolution satellite and aerial photography to find a shot of an aircraft in flight somewhere on the Earth. As previously reported here and here people at the Google Earth Community have been collecting the locations of pictures of planes captured in flight in the Google Earth data.
The folks at the GEC have been creating a database which is being updated daily, and until recently you had to go to the main post and re-download the KMZ file to get the latest updates. Now, my friend Valery up in Russia has created a network link

for the plane collections including the airplanes in flights, airports, locations of DC3s, and locations of Starships. He has also put train/rail-related collections as well. Once you download the network link, move it to your “My Places” folder for safe keeping. Then, click on the “Transportation” folder to see what it contains. Click on the folder you want to examine and explore. I recommend the “Air->All Aircraft in Flight”. You will be amazed at the dozens of planes in flight people have found. Double click on the placemarks to get a close-up view of these planes.
One thing you may notice is that some of the planes have a “ghost”. This is not a shadow, but is in fact an artifact of satellite imagery and the fact that planes are in motion. You can read an explanation here. A tip: when you are done looking at all the placemarks you can select the main folder with the right mouse button and choose “Hide Contents” to deselect all the placemarks. Then click on the folder “triangle” to open/close the folder.