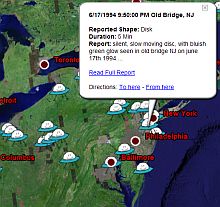 When I first heard about someone using Google Maps, and later Google Earth, to show UFO sighting locations it seemed a bit silly. But, after viewing the Google Earth file

, which breaks up the sightings according to the year it was taken, the application took on a different perspective. Note, this data is only for the United States (where most UFOs appear of course).
After loading into GE, look at the Places window and view the contents of the “UFO Sightings” folder. You can turn on the placemarks for each year in the database from 1860 through 2005. What I find interesting is the density of reportings over the years. There’s a huge increase in reports starting in 1995. It could be that once the Internet took off in 1995, it enabled more people to communicate their speculations. But, I wonder whether this says something about the sanity of our society over time?
At one point…

Years ago I worked at a planetarium, and we dedicated a show to explaining many common phenomena which are interpreted as UFOs (they were unidentified to the viewer of course). For example: weather balloons, helicopters, meteorites, satellites, etc. After a show people would come up and talk to us about their own UFO experiences. Apparently sharing this information results in even more reports. I wonder whether other countries around the world come even close to the number of reports in the United States?
The data in these maps is based on a database from the National UFO Reporting Center. The UFO Google maps mashup and Google Earth file were created by a company in Canada called Poly9. These maps were very well done technically by the way. Good job Poly9!