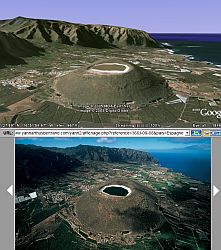 The 3D representation of the world presented by Google Earth is pretty accurate. Recently, while documenting a backpacking trip I made in Arizona, I managed to save the views of several placemarks so they matched the photographs of views from the mountain. But, there’s a big world out there and many other people have taken photographs.
Recently, someone called ‘Rednick’ at the Google Earth Community posted a really interesting collection of placemarks and showing many views in Google Earth of photographs taken by a famous French photographer Arthus-Bertrand. The placemarks are the locations of about 130 photographs from a collection called, appropriately enough, “Earth From Above

“.
Once you have downloaded…

Once you have downloaded the collection of placemarks, open the folders in the Places pane called “Arthur Bertrand Tour” (CAUTION: don’t turn on the contents of the entire folder as it will load all the images at once). In some cases, Rednick has included the actual photos as image overlays (make sure you double click on the placemark items to get the preset view). In other cases, he has a camera view where he has tried to accurately portray the same view as the photograph. You can view these photos by following the link in the placemark’s description bubble, which will take you to the photographer’s website.
I found it was best to use GEs built-in browser (make sure you are not using “external browser” in the GE preferences). Then you can see the photo right next to the GE view. Both the overlays and the camera views are an excellent example of showing professional photos combined with GE. This is the best collection I’ve seen since the National Geographic collection was added. Here’s Rednicks post at the GEC. Great work Rednick!