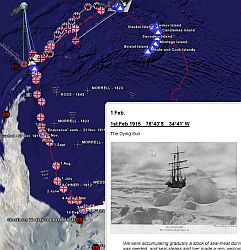 One of the all-time great adventure/rescue stories, perhaps because it was so well documented, is the story of Sir Ernest Shackleton. In 1914, Shackleton attempted to be the first to cross the continent of Antarctica, but his ship became trapped in ice and he and his men had to wait for 10 months for the winter to pass. But, the ship broke up in the ice. The tremendous effort Shackleton made to rescue his men (and he saved them all) is a great story. One of the most heroic sea stories of all time.
Some folks at the Google Earth Community have been putting together a tremendous collection of facts, placemarks, pictures, panorama shots, tracks, and other historical information. You can download the Shackleton “documentary” here

(currently V3.0). The main poster is someone called ‘pm77’, who was also helped by Frank McVey and others – and you can read the post thread here.
Once you download…

Once you download the GE file above, open the folder in your Temporary Places panel (on the left) called “South”. The first placemark contains background information and links to web sites which can give you all the details. If you already know the story, you can immediately start selecting the various placemarks and see pictures and background information. There are informative links which give interesting background perspectives and historical details.
As more people explore the capabilities of the the GE file format, I expect we will see more and even better historical “documentaries” like this within Google Earth. But, this will give you a taste of what’s to come.