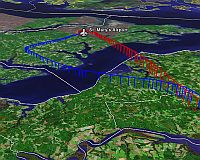 This weekend I flew my family from our home airport in Sanford, North Carolina to St. Mary’s Airport near Leonardtown, Maryland. We went for a visit with some family and drove up to see the Annapolis Boat Show (to look at sailboats – see here for why we do this). There was some rain along the way, but the conditions were still fine for an instrument-based flight (IFR) both ways. I just downloaded the GPS track from my GARMIN 60C, and converted it to GE using some tools so it shows the altitude of the flight (see my earlier story about flight logs). You can see our flight

in very good detail (blue on the way up, red on the way back).
If you zoom into St. Mary’s you can see our plane was first parked near the big terminal. The ground crew moved us to the transient parking area before we left. So there are two different end-points to the tracks. The accuracy is pretty good as I turned off the GPS before we backed the plane up (amusingly, the spot we parked in is empty in the GE satellite photo). I estimate the highres picture for St. Mary’s in GE and the GPS data differ only by about 25 feet,
While we were flying back, we had a few moments where clouds let us see the ground and I took some photos. Later this week I will georeference the pictures and maybe create some overlays just for fun. By the way, it was a really rainy trip. The boat show was wet, wet, wet. But, it wasn’t very crowded so we got to see lots of boats and the salespeople were happy to talk to us.
If you’re a pilot, read on for pilot-related observations…

For those of your who are pilots, you can check out some interesting things. I flew the GPS RWY 11 approach into St. Mary’s (2W6 – see the link provided in the placemark) and you can see where my autopilot made the turn to acquire the final approach. The autopilot was going a bit slow to make that sharp turn so I flew things manually (hence, we had a bit of a curve as I was closely monitoring the two steps-downs in altitude required by the approach). We were in the clouds and nearly down to 1800 feet before we first started seeing the ground. It wasn’t until we were less than 3 miles out and down to 1000 feet when we had a clear view and I spotted the airport. I quickly cancelled IFR and we landed.
On the way out this morning (the red line) we had a clear opening in the sky with clouds all around the airport. I was able to make a sharp right circling ascent over the airport and stay VFR (free of clouds). Then I called into Patuxent approach and picked up my IFR clearance as we climbed above the clouds to 8000 feet. We were directed by Raleigh approach to veer around RDU’s airspace (same as on the way up) and then were given vectors to the ILS runway 3 approach into Sanford. We landed safely both times, they were good flights!