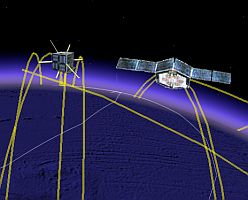 Some amateur radio enthusiasts started out by creating an extensive Google Earth network link which showed the current positions of amateur radio satellites. Next they provided a great deal of information about the satellites in their descriptions. Then, since they already had the technology, they went ahead and compiled information on nearly 800 satellites including: military, global positioning system (GPS), Globalstar, International Space Station, Hubble Telescope, and more. They also did an excellent job of using folders to organize the information.
You can read their announcement to the Google Earth Community here, and their recent followup where they describe the additional satellites and categories. Or, you can download the network link now

– NOTE: this takes quite a while to load since they seem to load all 800 satellites at once. (I’ve suggested they improve the network link by only loading the category of satellites currently being viewed, which will greatly improve the speed without impacting useability.)
Once you download…

Once you download the network link you will see a bunch of orbits, you will want to make sure you are zoomed out far enough to see everything. Go to the placemarks folder loaded and open it until you find and open the selected “amateur satellites”. You can click on the list of satellites to see descriptions for each satellite. Some of the satellites have really nice color icons (they say you may need the latest beta for this). I recommend you turn off a category of satellites (select the folder and choose “Hide Contents”) before you turn on a new category or just select an individual satellite. If you turn on a bunch of satellites, it’s really too much information to digest. Try playing with different angles to get some really interesting space shots. This is great work guys!
By the way, to be fair there are other celestial programs which will show these satellites as well (it may take some researching to figure out how to install the right components or enable the satellites):