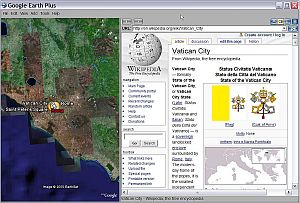 A new web site was announced last week which allows people to georeference WikiPedia articles. The Wikipedia is one of the grandest resources of information on the planet, created by the people for the people around the world (it’s available in at least 10 languages). The new web site is called Placeopedia. Placeopedia uses a slick Google Maps mashup interface to allow you to view “placemarks” of places linked to Wikipedia articles. Anyone can create a link (just like in WikiPedia, anyone can write or edit a story).

allowing you to see their data dynamically from within GE. It uses a view based reference for accessing their place marks, so just move your view and zoom to an area to see if they have a link to a Wikipedia article available for something you’re interested in. If not, you could go to their site and create a link yourself. If they do have a Placemark, simply click on the Placemark to find a link to the Wikipedia article.
This is a powerful way to link a rich resource of information (the Wikipedia) to a powerful geographical visualization tool (Google Earth). My hat is off to the folks at Placeopedia. I think they have created a nice way to encourage people to help implement the enormous task of georeferencing the Wikipedia information. It won’t be long before a nice consistent interface is created allowing people to link to GE from within Wikipedia articles.
Here’s an idea – when someone creates a Placemark for Google Earth, why not ask them if they can find a link to a Wikipedia article when they create it? I’m going to suggest this to Google.