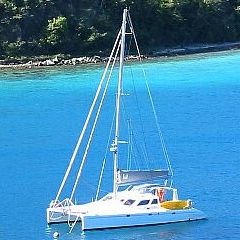 A couple of years ago we took a sabbatical and sailed our catamaran PatiCat from the US to Bermuda, down through the Caribbean islands, back through the Bahamas, and finally back to the US. This was the realization of a life-long dream. While on the trip, we documented our journey through a web site with lots of photos and stories. I had generated some maps showing various parts of our passages, but I always felt it was an inadequate way to demonstrate where we were. That remained true until Google Earth came out. 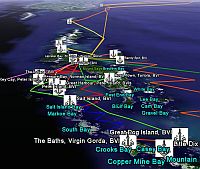 Although we had GPS and electronic charts for navigation, I regretfully did not have a direct interface to my onboard computers to record our exact paths. So, for the past several weeks I have been spending a little time each day recreating our passages and anchorages using our logs, journals, and Google Earth Plus. (Notice to Mariners: do NOT use my data for navigation purposes as it is only approximate and not based on navigational charts – just satellite photos). It’s still not a completed work (I haven’t finished the passages on the way back), but its close enough for sharing.
Once you’ve loaded my Google Earth PatiCat file

, you will see that each passage is a different color (only a few of the passages are multiple day passages – like out to Bermuda). The interesting thing about this work is that I have created links and information for the anchorages to web pages at our PatiCat web site, which describe our visit there or even interesting details about the anchorages and what to do nearby. So, in effect, its like a Google Earth cruiser’s guide for the areas we sailed in the Caribbean, Bahamas, and Bermuda. It is deceptive how much information is here (for example, zoom in on Beaufort, NC to see how we left the fuel dock and transited the waterways to the sea. I would love to hear from other sailors who are using Google Earth, or from anyone who thinks this is interesting.
You can visit our PatiCat web site at: www.paticat.com to read the whole story. We sold the boat a few months after we returned in order to return to normal life. My wife and I plan to buy a new boat in a few years (after the kids move out) and do a circumnavigation. Next time we will use Google Earth (or its successor) to more accurately document our trip. We may still not cover seven seas, but it will still be another adventure!
Footnote: the long purple line from Cape Town is when our boat was delivered from South Africa to the BVIs (I hired a delivery captain for this and chose not to go with him even though it only took 31 days – which is fast for a sailboat that used practically no motor time during a passage of 5700 nautical miles).