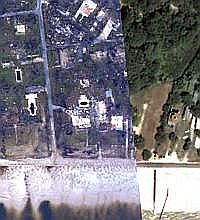 Google has started releasing image overlays of damage from Katrina for Google Earth. They made the announcement here and on the Google Earth home page. You can really see the before and after differences with these images (you can turn the images on and off to do comparisons or slide the transparency slider on and off).
[EDIT September 3: Google has made available a huge amount of imagery of the damaged areas tapping into all images from NOAA and all images done by readers of their forums. You can read about it in their post here. Or, you can download the NOAA imagery links

now. This will show the location of all the images they have, you can click on a red dot and then select to download the image. NOTE: these are 4Kx4K images and will take up a lot of memory. Don’t turn on too many at once or your machine will get overloaded.] 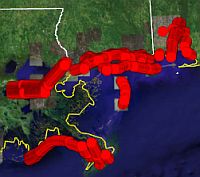 The GE developer team mentioned they realize some of the user-supplied images are just as good or better right now. But, these images are placed on hefty servers with mega bandwidth, so they should be more reliable than some of the other sources.
It seems to me Google could make these images available through the Layers fairly easily. I don’t think it would be a good idea to change the primary database with these images as hopefully the signs of destruction will go away over the coming months. Although, I’m sure the buildings and economies will take years to rebuild.