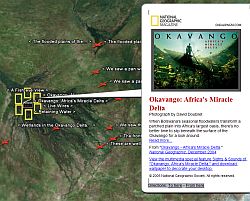 [EDIT Aug-2006: After you read this article, go to categorized african animals you can see in Google Earth]
Google just yesterday made a major addition to their database layers with National Geographic Information about Africa. Look for the “National Geographic Magazine” layer in the Layers pane on the left in GE. It is currently found under the Gallery layer folder.
As you zoom over Africa you will see the yellow National Geographic logos appear over different regions. If you click on these symbols you will see a photo, title, brief description, and a link to a National Geographic excerpt or entire story. These marks are georeferenced to what the article was written about of course.

Even more significant, you will see lots of red “x”-like symbols (actually a little airplane) which mark National Geographics’ “Africa Megaflyover” images which have been overlayed in Google Earth where they were taken (you may have to zoom WAY in to see some of these). You will find photos of herds of animals, dunes, remote primitive villages, hippos, and much more. How much more? According to an article at Google’s Blog there are 500 of National Geographics Mike Fay’s database of 92,000 flyover images. We can only hope he will add to this very cool collection of images. [Edit December 2007: more recent story about this layer.]
Finally, there are also links to multimedia presentations (videos and flash) showing the “sights and sounds” of Africa in various locations.
This is a very significant update to the GE database that shows the amazing power of this interface for showing georeferenced information for both visual and intellectual significance.